This is the exact program that Thor followed for his main strength building block leading up to his most successful year in Strongman – 2018. The main competition season of 2018 started with the Arnold’s Classic, followed by Europe’s Strongest Man, and then finished off with the most prestigious competition of all, The Worlds Strongest Man, which Thor conquered all and became the first man in history to win all three events in one year – 2018.

Thors Power Program is how Thor trained 12 weeks out from the beginning of his strongman competition season to get strong. REALLY STRONG. He followed the Strength System, created by his coach Sebastian Oreb, where the main tool to strengthen his body was a barbell. He performed the basic gym lifts; squat, deadlift, bench press and overhead press, with an enormous emphasis on lifting technique, as well as an intelligent approach to load selection and recovery. The exercises, techniques and principles used in Thor’s Power Program can be followed by anyone who wants to develop a strong body that moves well and is free from injury.

Now, they want to share their program, as well as their tips, secrets and the training principles they used to achieve victory, to help you get strong the right way! 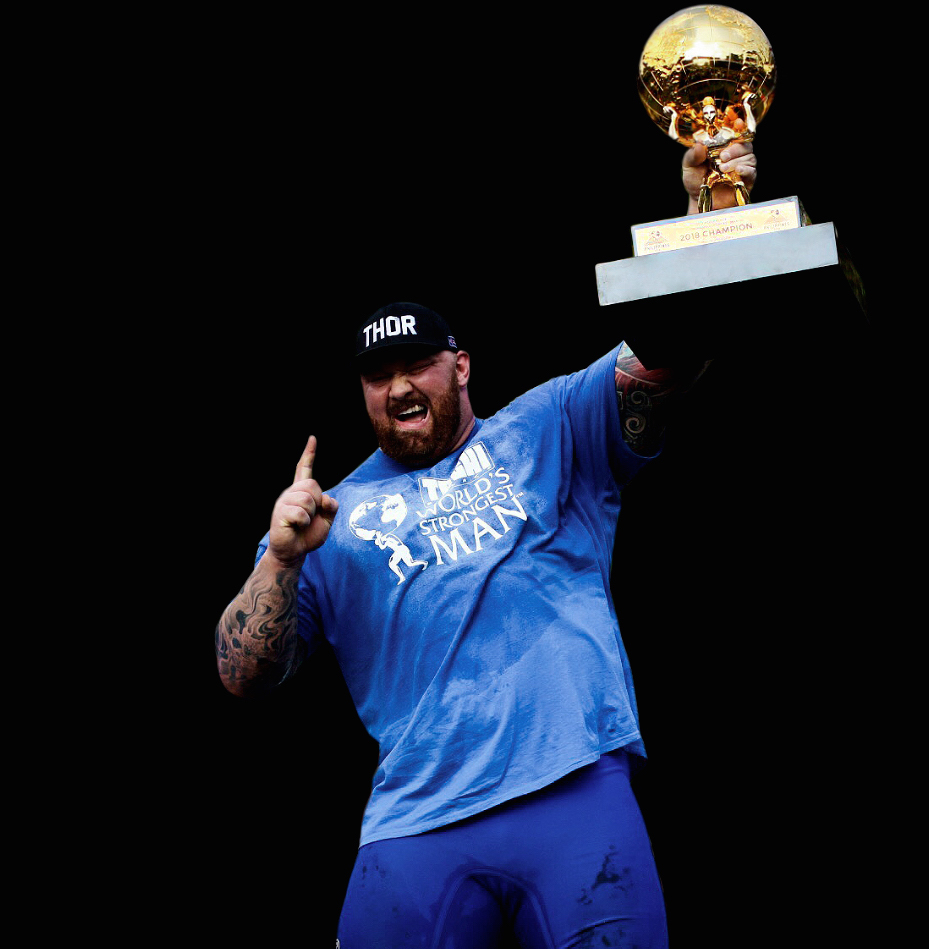 My name is Hafþór Júlíus Björnsson and I am the Strongest Man in the World.

I am 29 years old, 6 foot 9, 430lbs /195kg bodyweight. I have been competing in Strongman since I was 19 years old and the title of The Worlds Strongest Man wasn’t just given to me. I have worked my butt off to get here.

I began my sporting career as a basketball player and I was quite good at it, but at the age of 20, I was forced to retire from this sport because of an injury. I was always a very active and competitive person, so I was never going to just quit sport altogether, so I started training weights with my friends. In Iceland, we have a very successful history in the sport of Strongman, so naturally, when I started training with weights, it was strongman icons like Jon Pall Sigmarsson and Magnus Ver Magnusson that were a huge motivation for the way I trained. They were both Icelandic legends and they had both won the World’s Strongest Man title four times each. I even started to train at Jakabol Gym, which was owned by Magnus Ver Magnusson.

From the very first time I lifted weights, I was strong, but not even close to my level of strength now. This took time. I spent countless hours in the gym trying to lift as heavy as I could with every exercise that I tried. There was no structure, no periodised plan and not a huge amount of technique. My friends and I just all tried to outlift each other.

For many years I came close to winning the WSM title up against some of the best strongmen in the history of the sport, but in 2018 I did everything to make sure that I was without question, The Strongest Man in the World!

One of the biggest turning points in my career was when I met my coach – Sebastian Oreb, The Australian Strength Coach. I was travelling to Australia for work and came to his private strength facility in Sydney called Base Gym which was run by Sebastian Oreb and his wife Felicia. Sebastian was known in Australia as the coach for the strongest athletes in the country and after training with him for one day, I could see why. After spending many years without a coach, I knew that if I wanted to be the best, I needed to make a change, so I asked Sebastian to be my coach.

The training program I followed to be The World’s Strongest Man was simple, but clearly very effective. I followed the Strength System, created by Sebastian, where the main tool to strengthen my body was a barbell used to perform the basic gym lifts, with an enormous emphasis on lifting technique, as well as an intelligent approach to load selection and recovery.

Now, together with my coach Sebastian Oreb, we want to help you get stronger than ever before by sharing the methods and techniques we used to make me The World’s Strongest Man.

Now it’s time for you to GET STRONG!!! My Name is Sebastian Oreb, also known as the Australian Strength Coach. I am a strength coach to some of the best athletes in Australia and in the world. I am an elite level powerlifter and am currently ranked as the Number 1 Powerlifter in the Australian 110 kg / 242 lb weight class. I coach a team of professional athletes from a variety of sports from strongman, powerlifting, weightlifting, rugby, mixed martial arts, fitness modelling and also some of the highest level personal trainers in the industry. I work with a team of bio-mechanists, physiotherapists, dieticians and some of the best strength coaches around the world.

The training methods I use for all of these sports are very similar and are based around building a strong body to allow optimal performance in the athletes chosen sport. I use simple movements performed with correct technique and a balanced approach to programming to strengthen, condition and rehabilitate athletes.

I met Thor in 2016 when he visited my gym, Base Gym in Sydney. I was given the opportunity to host an event alongside Thor as a presenter, to showcase his strength in front of some of the most influential fitness professionals and media in Sydney. As we were demonstrating the exercises, he was intrigued by my coaching style and after a day spent in the gym training together, he asked me to be his coach. This was the biggest compliment I had ever received in my career as a coach and without hesitation, I jumped at the opportunity and we got started on planning his training.

Obviously, Thor was already strong, but there was no way that he was at his peak. Looking at his biggest lifts at that time, there was room for improvement with lifting technique and there always is. When working with someone as strong as Thor, who is frequently handling super human loads in his training, there are many factors that need to be considered. Part of my role as his coach is to structure his training days, determine exercise selection, calculate loads to be lifted and get him as strong as possible and keep him free from injury, to ensure he is reaching his goal, which is ultimately, to be the World’s Strongest Man.

After years of refining our processes, we have developed the best techniques and methods to develop strength at the highest level and now we want to share it with you. Our approach is simple and effective and we can’t wait to teach you the training techniques and principles that we use to help get you as strong as possible.